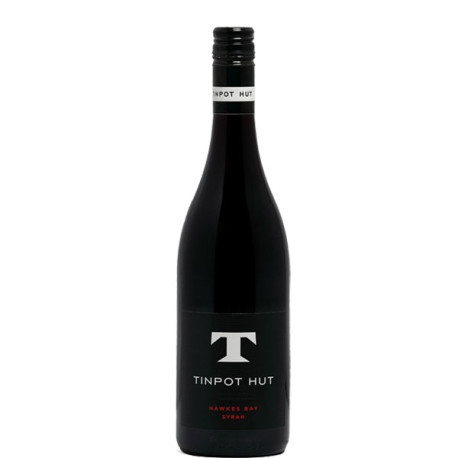 is ruby red with a purple hue. White and black pepper aromas mingle with violets, plums, a subtle chocolate and leather spiciness. Medium-bodied with pepper and cinnamon characteristics and a slight bacon note on the finish. A firm acid backbone with silky tannins harmonises with the fruit and culminates in a warm ripe finish.

Each parcel of fruit was monitored during the long ripening period so that it could be harvested at optimum maturity in cool conditions. The grapes were de-stemmed into small open top fermenters where cool, pre-fermentation maceration took place for five days. Selected yeasts were used for fermentation and the must was hand-plunged three times a day. After fermentation and pressing, the wine was racked into a mixture of small stainless steel tanks and new and used French oak. Malolactic fermentation followed in oak, where Tinpot Hut Hawkes Bay Syrah 2011 wine remained for nine months prior to blending and bottling.

Tinpot Hut wines are made primarily from fruit grown on winemaker Fiona Turners vineyard in Blind River. Fiona, who has worked with Matt Thomson for a number of years, supplements her own grapes with fruit from other growers in Marlborough and Hawkes Bay. The tinpot hut that gave its name to Fionas wines is an old mustering hut in the remote hills between the Wairau and Awatere Valleys. The huts were used as a base for musterers as they rounded up the sheep that had been in the hills from spring to autumn. The name links Marlboroughs past as a sheep farming centre with its current state as one of the worlds most dynamic wine regions.

Two different clones of Syrah are sourced from a single vineyard site in Hawkes Bay, in the subregion of Dartmoor from some of the oldest Syrah vines in New Zealand. This site benefits from slightly higher altitude, allowing warm days and cool nights to concentrate flavours and ripen tannins without loss of acidity. Planted on an ancient river terrace, the soils have a silt top soil overlaying stone, mixed with some clay and silt loam, allowing good drainage and proving good for growing a more restrained, elegant and aromatic style of Syrah. Tinpot Hut also sourced fruit from the Gimblett Gravels region where the unique gravel soils give power and structure to the wines.