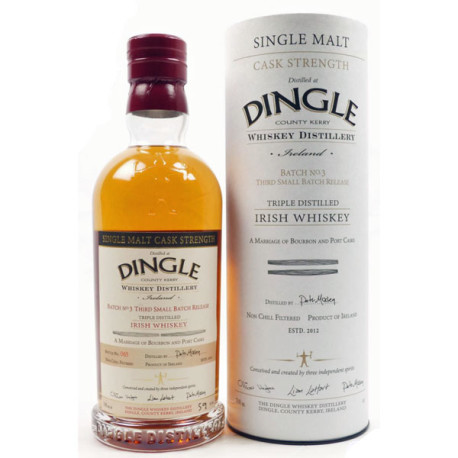 reflects the original flavour of the Single Malt whiskey matured in a marriage of Bourbon and Port casks. The significance in 500 bottles is a nod to, and reflects our Founding Fathers all across the world. It is at this strength where the flavour profile shows the true extent of this whiskey.

Created by the marriage of meticulously selected casks, both Bourbon and Port, this single malt Irish whiskey is a small piece of history, unique and rare. Dingle Single Malt Cask Strength Whiskey Batch No 3 is a limited release of 13,000 bottles at 46.5% and 500 bottles at Cask Strength. It is a marriage of Bourbon and Port casks. A burst of blue/black fruits on the nose forms a tart almost jam like sweetness on the palate with some subtle notes of citrus peels, the liquid coats the mouth like warm honey, mixed berries and marmalade linger on the tongue.

Made in the outstanding beauty of Dingle, Co. Kerry on Ireland’s South Western tip, Dingle Distillery was setup by 3 independent spirits with the purpose of reigniting the aritisan distiller. Dingle Whiskey is a product of its environment. From the localised well water to the immensely manual mashing, alongside the wooden fermentation vessels that feed into the three bespoke copper pot stills, the production is purely Dingle. The micro climate then creates a maturation like no other. There is no manipulating the course of the whiskey, only nature can do that. Of course, Dingle is small. Their output of whiskey is 2 casks per day. They take the best Irish malted barley and make pure pot still malt whiskey. Then they put it in casks and let the mild, moist, unique Dingle air do the rest. No whiskey in Scotland or Ireland experiences a maturation process like that. Dingle is definitely Dingle.

The first Dingle Whiskey was released on 19th December 2015 as Cask No.2. This was one of four casks filled on the day, three years and a day previous.