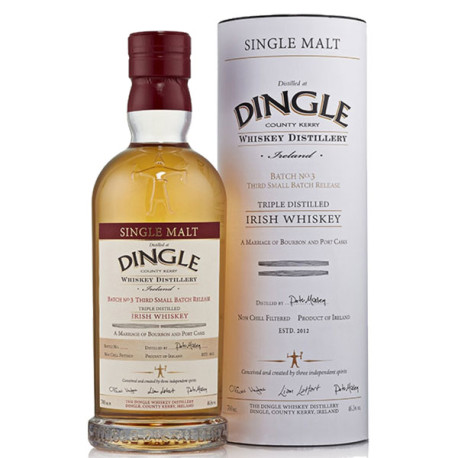 is created by the marriage of meticulously selected casks, both Bourbon and Port, this single malt Irish whiskey is a small piece of history, unique and rare. Batch No. 3 is a limited release of 13,000 bottles at 46.5% and 500 bottles at Cask Strength. It is a marriage of Bourbon and Port casks. A burst of blue/black fruits on the nose forms a tart almost jam like sweetness on the palate with some subtle notes of citrus peels, the liquid coats the mouth like warm honey, mixed berries and marmalade linger on the tongue. It is distilled in the hugely popular distillery in Dingle, Co Kerry. The very special stills are a key part of the Dingle Story. They take the best Irish malted barley and make pure pot still malt whiskey. Then they put it in casks and let the mild, moist, unique Dingle air do the rest. No whiskey in Scotland or Ireland experiences a maturation process like that. Dingle Single Malt Whiskey has just been launched in very limited quantities.