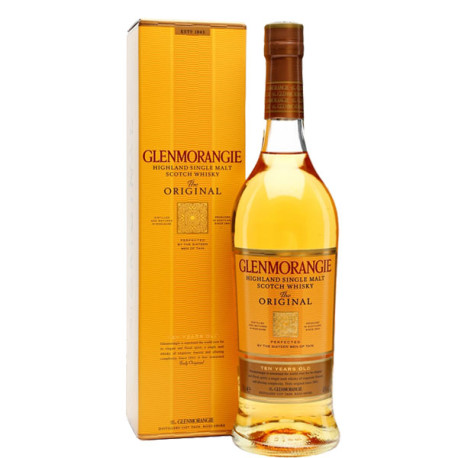 is produced by marrying the delicate spirit that emerges from Scotland’s tallest stills, with first and second fill American white oak casks. On the palate, vanilla can be detected on the tongue before bringing a burst of flowery fruitiness. Shortly after tasting, you will be left with a clean and salving aftertaste with hints of orange and peach.

The core release in the Glenmorangie range is this their Glenmorangie 10 Year Old Malt Whisky. Since rebranding more emphasis has been put on the ‘Original’ and less on the fact that it’s ten years old. The cask types are first fill and second fill bourbon barrels which famously come from the distillery’s own oak forest in Missouri. Flavours are exactly what you would expect from an entirely bourbon cask matured whisky. Light and soft with lots of vanilla, ripe lemon, peach, honey and orange. Not massively complex, this could be described as an aperitif whisky or one to try before moving on to bigger, bolder beasts.