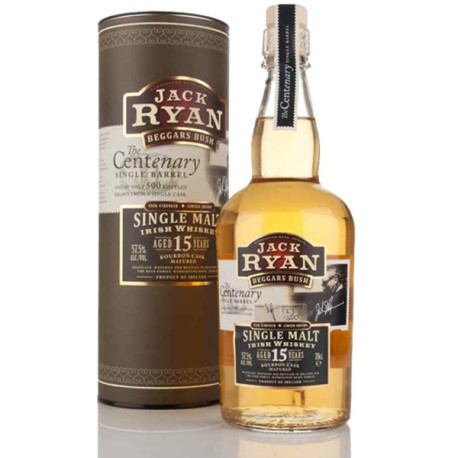 was released as a limited edition to commemorate the 1915 birth of the inimitable Jack Ryan, Dublin publican and whiskey finisher, the Ryan family, who have run the Beggars Bush Pub on Haddington Road since 1913. Jack Ryan Beggars Bush 15 Year Old Single Malt Irish whiskey is cask strength (57.5% ABV) single malt – known as The Centenary Jack Ryan.

Matured in ex-bourbon casks, The Centenary Jack Ryan 15 Year Old Single Malt is limited to 500 bottles worldwide, each signed and numbered by Eunan Ryan, latest scion of the Dublin whiskey family. The first 100 bottles are available exclusively to the Irish market.

The contemporary Jack Ryan brand of whiskey is a descendant of the original Ryan’s Malt, commissioned by Thomas Ryan since 1913 and continually improved upon by his son Jack up until the 1950’s. Ryan’s Malt was savoured and greatly appreciated by customers of the family’s pubs over the years including the Beggars Bush. Today, Jack Ryan is a brand built on craftmanship, heritage and the tradition of five generations and over 100 years in the licensing trade in Ireland.

“This 15 year old malt is a distinctive product with a smooth texture and uncompromised taste notes, providing a truly special gift for any discerning whiskey lover” says Eunan Ryan, Director, and son. “Its distinct pale gold colour, fruity aroma and flavours and spicy, oak-infused finish are those of a premium whiskey. Jack would have approved and been proud”.