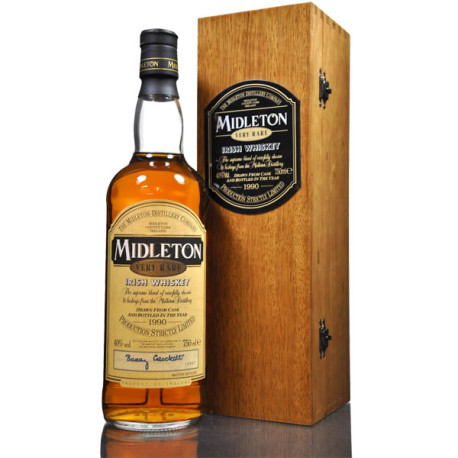 The 1990 edition of Midleton Very Rare experienced a rebrand. The white box with gold lining was replaced with a wooden box with gold plating on the front. Midleton Very Rare is a bottling of hand selected whiskeys from the Midleton warehouses that is only bottled in small amounts once or twice a year. Midleton distillery is the centralised distillery for Irish Distillers, whom produce Jameson, Paddy, Powers and the single pot still ranges such as Redbreast and Green/Yellow Spot.

That said, no two years are exactly alike. The Midleton Very Rare range is not blended like other whiskeys to create continuity in the whiskey. In fact the handcrafted nature of the whiskey creates a unique offering that has subtle but recognisable differences between the years. This allows enthusiasts and collectors to enjoy the variances year on year and create a new experience every time you sample another year.