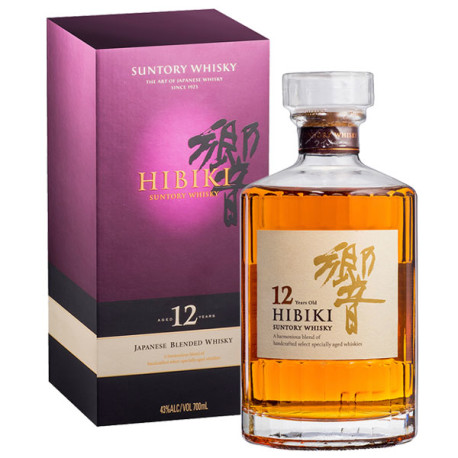 is a stunning 12 year-old blend from Hibiki, some of the whisky has been part-matured in plum liqueur casks. Lovely malt from Hakushu and Yamazaki, plus some aged grain from Chita, this terrific Japanese blend picked up the top prize in its category at the World Whisky Awards 2010.

Suntory whiskies have 3 distilleries. The Yamazaki Distillery is Japan’s first and oldest malt whisky distillery established in 1923 by Suntory’s founder Shinjiro Torii. In 1972, Keizo Saji—Suntory’s second Master Blender— took a momentous step forward in pursuing Shinjiro Torii’s vision for whiskies blessed with the riches of Japanese nature and craftsmanship. On the misty, calm shores of Chita Peninsula, Keizo built a distillery dedicated to creating the highest-quality Japanese grain whisky. The Hakushu Distillery was founded half a century after Yamazaki. Keizo Saji inherited his father’s vision in his quest for innovation and constructed this second Suntory distillery in 1973.