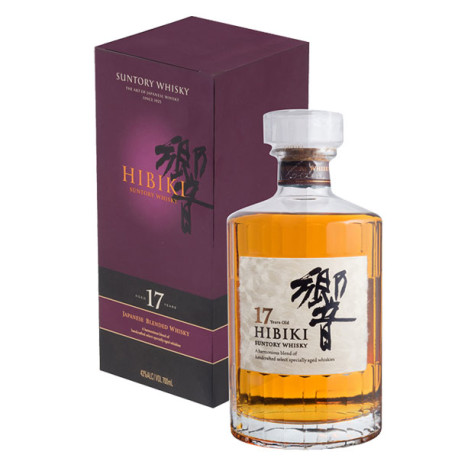 has been aged for 17 years, which is around the average age for Japanese whiskies. The age denotes the youngest component of the spirit, this blend may include parts that are far older. Japanese whiskey has become synonymous with quality around the world. Whiskies like Suntory Hibiki 17 Year Old Whisky are more similar to Scotch than traditional American whisky and exhibit smoky and floral accents.

Suntory Hibiki 17 Year Old Whisky is a fantastic Japanese blend, made with aged malt and grain whiskies from Suntory’s three distilleries. Spicy and sophisticated, this is great for catching people out at blind tastings. Recently awarded a Gold ‘Editor’s Choice’ award from Whisky Magazine and picked up the top prize in its category at the World Whisky Awards 2010.

Tasting Notes: Nose – ripe fruit, with a prominence of plum. There are also some light spices like cinnamon and nutmeg, as well as a mild nutty note. Overall a sweet, light and pleasant nose.
Palate – the taste is not as richly fruity as one would expect from the overall fruitiness of the nose, but it does retain a citrus zest along with sultana. The grain starts to present itself later in to the tasting with a very full sweetness which comes after the inital spiciness. There is a little oak bitterness but not enough to be of any concern. Like the Yamazaki range it is very smooth. Its body is about medium.
Finish – sweet cinnamon and honey juxtaposed with bitter oak, morphing to light fruit towards the end. Very long.