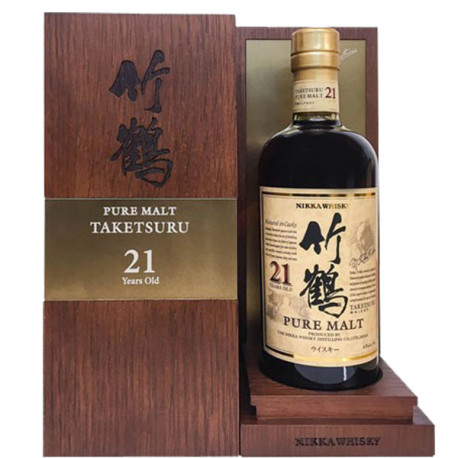 is a top-class whisky, a real crowd pleaser, with bundles of fruit, spice and oak. There’s a lovely richness to the mouthfeel, too. Round and generous, Taketsuru 21 Year Old Whisky captures the hearts of both novices and experts alike. Perfectly balanced and mellow, with an endless finish that delivers a complex range of aromas, from tropical fruits to nuts and mocha. With its four World Whisky Awards titles of world’s best blended malt in 2007, 2009, 2010 and 2011, Taketsuru 21 Year Old Whisky is quite simply one of the great whiskies of our time.
On the nose it is fresh and fruity at first, with juicy apples and pears to the fore. Then, aromas of spiced chocolate, liquorice and Demerara sugar arrive. On the palate it is rich and chocolately, with toasty oak, candied peel and orchard fruits. Some cinnamon, too, along with stem ginger and crème brûlée. The spice and oak last a long time, with the fruit softening things just a touch. Absolutely Delicious!

Founded in 1934 by Suntory’s first master distiller, Nikka has risen to become Japan’s second largest distiller, producing a wide range of single malts as well as their impressive blended whisky range. Masataka Taketsuru was born in the coastal town of Takehara (now Takehara City) about 60km from Hiroshima City. The Taketsuru family owned a “sake”(Japanese brew made form fermented rice) brewery that goes back to 1733 – and continues to produce fine sake today. Taught early that sake making is a painstaking fine art, Masataka studied diligently and trained at university as a chemist, preparing to carry on the family trade.
In 1918, Masataka Taketsuru embarked alone on a long voyage to Scotland. In this distant land the secrets of whisky-making would be imparted to this young Japanese man, Scotch whisky captured the young man’s imagination, as well as the interest of few other enterprising Japanese of that day. Here he would meet the woman who would become his bride. In 1920 Masataka returned to Japan with Jessie Roberta (Rita), whom he had married earlier that year. He decided to dedicate his life to whisky and later joining a company that aspired to make genuine whisky, he succeeded under its employment in producing Japan’s first whisky.
Masataka’s vision of whisky was formed by his experience in Scotland, and he knew that the right environment was essential. However, it was becoming apparent that in order to produce whisky as he felt it had to be, he would have to become independent. Thus in 1934 Masataka established Nikka Whisky, and built its first distillery in Yoichi, Hokkaido, which – though inconveniently located – he had always considered to be the ideal site in Japan for whisky-making, similar in many ways to the Scottish town where he had studied.