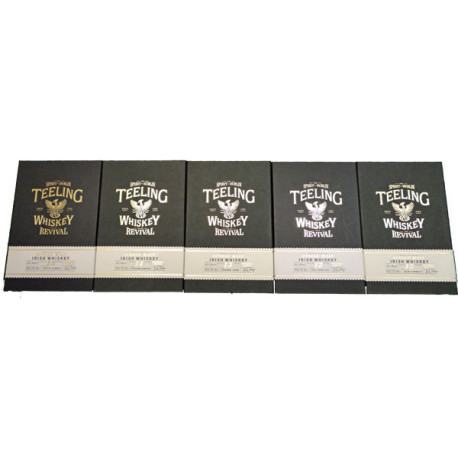 NOTE: THIS TEELING WHISKEY REVIVAL COLLECTION CAN ONLY BE COLLECTED AT OUR SHOP, WE WILL NOT DELIVER.

Revival Volume I: 15 Year Old
The first release from the Revival range was a 15 Year Old distilled in 1999 and matured entirely in Rum casks. There were only 10,000 bottles released of the 15 Year Old. The nose opens with lots of ripe tropical fruits such as banana and papayas, giving it a lovely sweetness. This is complemented with a slightly duller yet still flavoursome coconut note. There is also a delicate oaky flavour that comes out in the undertone and bolsters the fruitiness. On the palette the flavours become slightly richer and better developed, with lots of spice and heat coming through. The oak becomes a cinnamon and vanilla flavour, with a thick wooded note to it. This adds depth and complexity to a wonderful dram. The fruit ripens and becomes sweeter yet, with candied pineapple and grapefruit appearing. These continue into the finish, which ends in a flourish of toasted white sugar and oak wood, and of course a healthy dose of fruit.

Revival Volume II: 13 Year Old
After the 15 Year Old, Teeling released a slightly younger expression, a 13 Year Old that was distilled in 2002 and matured for 12 years in ex-Bourbon barrels before being finished for 12 months in Calvados casks. Again, this expression was limited to 10,000 bottles. Similarly to the 15 Year Old, the 13 has a sweet flavour profile, except this time it is full of orchard fruits and pastry. The nose is full of white sugar and caramel apples, with a slight tang of citrus peel. This makes it well rounded and full of character. There is also a warming note of cinnamon that adds a nice spice. On the palette the caramel apples become baked apple pie with a caramel drizzle and candied orange peels on the side. The sweetness is sharp and lively, with lots of feeling to it. It is joined by a more subtle pastry flavour that is buttery and flakey, lending a smooth mouth feel. The cinnamon warmth is dusted over all of this and takes on a slightly peppery and wooded note. This continues into the finish, where it lingers alongside more apples and some pears, with the oak become fully realised.

Revival Volume III: 14 Year Old
This release was followed up with a 14 Year Old, released earlier this year. Like the 13 Year Old, it was distilled in 2002 and matured in ex-Bourbon casks. However, it was then finished in Pineau des Charentes casks. This again is a deliciously sweet expression, bursting with fruits flavours and caramel notes throughout. The nose has lots of pears and green apples, with a slightly grassy hint to it that is reminiscent of an orchard with fresh cut grass. There are also some sweeter fruits such as pineapples and apricots. The sweetness and the earthy, grass notes go perfectly together. The palate is also spilling over with flavours, and the orchard wualities make themselves better known here. The wood of the barrel comes through with a vanilla note to it and is complemented with some rich honey flavours. These give the whole thing a thick, soft mouth feel. The fruits become slightly darker and riper, but are brilliantly saccharine, like they are glazed with sugar syrup.There is a lovely hint of coffee in the background that adds a little bit of depth. This slightly bitter note makes itself known on the finish, where it lingers with the fresh green apples and orchard notes from the nose.

Revival Volume IV: 15 Year Old
The fourth bottling of this series consists of 15-Year-Old Single Malt that was aged initially in ex-Bourbon barrels before being finished for over 12 months in unique Muscat Port barrels that impart very distinct hints of citrus, rose petal and ripe peach. Limited to just 10,000 bottles, the resulting Single Malt is then bottled at 46% with no chill filtration. The Revival Vol. IV joins Teeling Whiskey’s range of award winning Irish whiskeys which have collected over 110 international awards throughout the past four years. The maturation from the ex-Muscat Port casks creates a unique palette pleasing taste profile; ripe fruits and rich spices intermingle with creamy vanilla to give a wonderfully dry, woody finish. A signature aroma of ripe peach, pineapple and satsuma mandarin tops off the dry dark chocolate undertones of this limited edition Single Malt.

Revival Volume V: 12 Year Old
The fifth bottling of The Revival consists of 12-Year-Old Single Malt that was aged initially in ex-Bourbon barrels before being finished in a combination of Cognac and Brandy barrels, imparting distinct hints of toasted almonds and freshly pressed grapes. Limited to just 15,000 bottles, the resulting Single Malt is then bottled at 46% with no chill filtration, a signature of all Teeling Whiskeys.