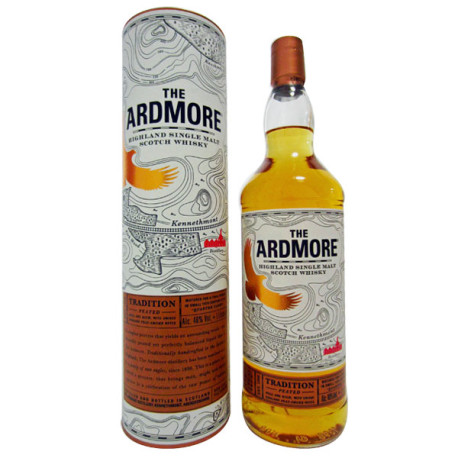 is a typical single malt Scotch from the little village Kennethmont in the Scottish Highlands. The whisky region is better known as Speyside and its spirits are noted for their elegance and delicateness. The Ardmore Scotch Whisky’s smell is a combination of a slightly sweet caramel aroma with the nuances of roasted oak and a bit smoky peat. Overall, the bouquet has a silky soft appearance. The body is voluminous and strong. It is composed of grainy components like cereals, especially barley, and an intense woody bourbon aroma. A relatively robust, smoky peat flavour can be detected. It unites with the taste of sweet caramel as well as the savour of vanilla, which stems from the oak casks. The finish drags on long and turns into a slight dryness. It is characterized by a hint of oak, a subtle malty sweetness and a bit of sugary barley.

The maturing process of the Ardmore Scotch Whisky Traditional Peated consists of two different periods. During the first phase, the Speyside whisky is filled in ex-bourbon casks that are made of White American oak (Quercus alba). They have been selected carefully and imported from the USA. Afterwards it is stored in quarter casks. These casks are smaller than the former ones. Thus, the Scotch has more contact to the wood and can develop a stronger and more distinctive character.

The Ardmore Distillery was founded in 1898 by Adam Teacher and is operated by Beam Suntory today. The distillery is specialized in the producing of single malt Scotch whisky. Their source of fresh water is a small spring on Knockandy Hill, which is known for its exceptionally purity.

Please Note: This is a 1 litre bottle